The roads of the Lone Star State are one law closer to being much, much safer thanks to the passage of ignition interlock legislation. 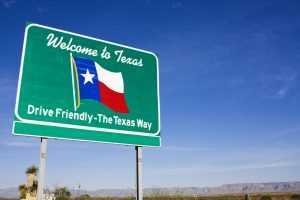 House Bill 2246 (passed by the Texas House of Representatives on May 5, 2015 and unanimously approved by the Texas Senate on May 27, 2015) was signed into law by Governor Abbott on Friday, June 19th.   Through this new Texas ignition interlock law, first-time DWI offenders will have access to occupational driver’s licenses as long as they agree to install an Ignition Interlock Device (like Smart Start’s SSI-20/20 or SSI-20/30) in their vehicle.  According to studies by the U.S. Centers for Disease Control, Ignition Interlock Devices have proven effective in reducing repeat drunk driving offenses by 67% more than license suspensions.  This statistic indicates that, with the help of HB 2246, Texas stands to significantly reduce instances of drunk driving statewide.

These courageous lawmakers, Mothers Against Drunk Driving (MADD) the Coalition of Ignition Interlock Manufacturers (CIIM), Texas-AAA, and many traffic safety stakeholders in Texas have been working hard to make a change in the way that the Lone Star State handles first-time DWI offenders.  HB 2246 is a strong step in the right direction in making our Texas roads a safer place to drive.

In local and state cases, offenders may be familiar with the term “breathalyzer,” which refers to specific technology designed to test blood alcohol content (BAC) levels.  Ignition interlock devices are different in that they are affixed to vehicles (in a convenient way—and, at Smart Start, free of charge) to prevent drivers from operating motor vehicles like cars, vans, trucks, or crossover vehicles while impaired.  Through HB 2246, DWI offenders will be able to drive during their restricted driving periods, but the ignition interlock technology will ensure that the offenders are not driving drunk.  Suspended licenses—the current legal prescription for first-time offenders—have not afforded the same guarantee.  With Governor Abbott’s signature, Texas joins the ranks of twenty-four other states—including Arizona and New Mexico—that require Ignition Interlock Devices for first-time drunk drivers.

We all want the roads in Texas to be as safe as they can be.  At Smart Start, we’re here to make that happen.  Should you find yourself in need of an Ignition Interlock Device—or if you want to get a jump-start on the law and hold yourself accountable—click on the link to your right to fill out an online registration form or call Smart Start at 1-800-831-3299 today to schedule your FREE ignition interlock installation at any of our locations.

Use our fast online form